The Arabian Breeders World Cup (ABWC) event returned to the South Point Equestrian Complex for the tenth consecutive year April 14th - 17th, 2016 in Las Vegas, Nevada USA. The show was a celebration of the Arabian breed and the lifestyle associated with owning Arabian show horses. Worthy of its location on the glitzy Las Vegas Strip, the ABWC has become a must-attend event for Arabian horse enthusiasts all over the world. The Arabian Horse Breeders Alliance (AHBA) is a worldwide community of breeders united in their passion and devotion to the Arabian, promoting thoughtful guardianship for future generations of these magnificent horses.

2016 marked the tenth consecutive year of the ABWC show. One of the world’s premier purebred Arabian horse shows, this international competition garners global entries; over 26 countries are represented annually. Nearly every person who witnessed the spectacular event noted the outstanding quality of Arabian show horses presented.

As always, the event showcased the natural beauty, nobility, excitement and unique characteristics of the Arabian horse breed while providing a lively and entertaining experience for both breeders and those new to Arabian horses. Thefive-person panel of internationally renowned judges included, Cedes Bakker of the Netherlands, Guillermo Concaro of Argentina, Van Jacobsen of the USA, Dr. Nasr Marei of Egypt, Graham Smith of Australia and George Zbyszewski of Poland and the USA. Over 220 horses competed for more than $175,000 in cash awards. Prize monies were offered in the AHBA Futurity and Legacy Futurity to Amateur Handlers and for the first time in the United States, Al Baayda Farm presented the exciting Vote and Win program to spectators. $10,000 was awarded to participants who voted on the Champions that matched the judges selections. It was very well received as it encouraged audience participation both in person and on line via live feed for the first time at the Arabian Breeders World Cup.

Entries represented the United States and 25 other countries and included world champions, previous World Cup champions and dozens of US National, Scottsdale and international champions. The Arabian Horse Breeders Alliance welcomed the Nellis Air Force Base Honor Guard once again for the Opening Ceremonies on championship day while the United States National Anthem was masterfully sung by Mr. Ron Armstrong. Robert and Dixie North organized the time-honored tradition of the presentation of the Flag of Nations. 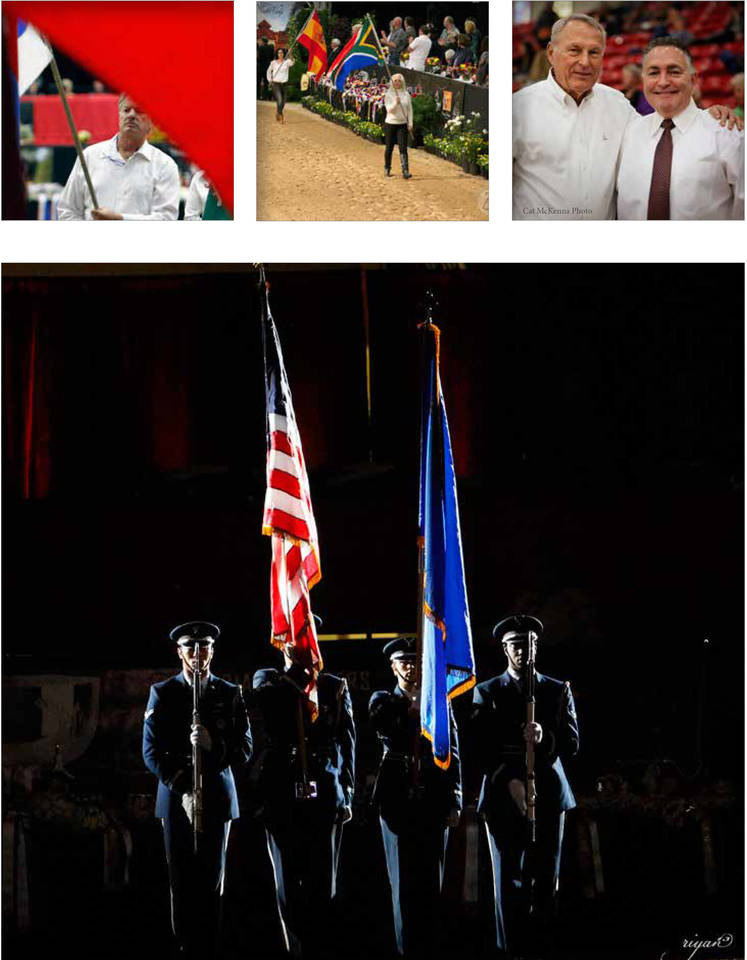 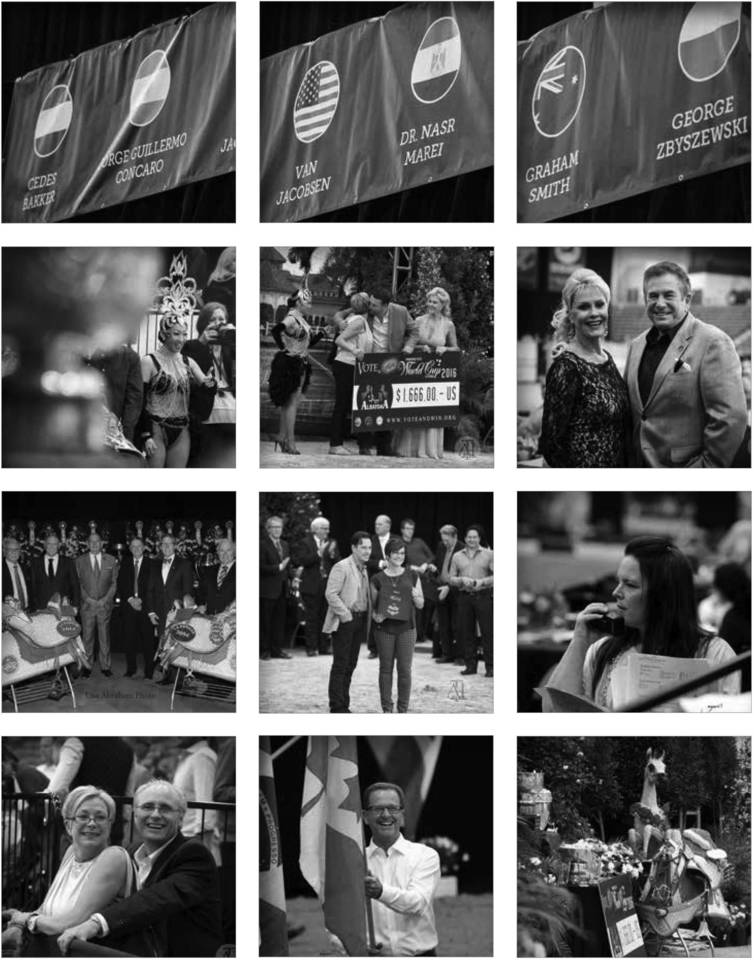 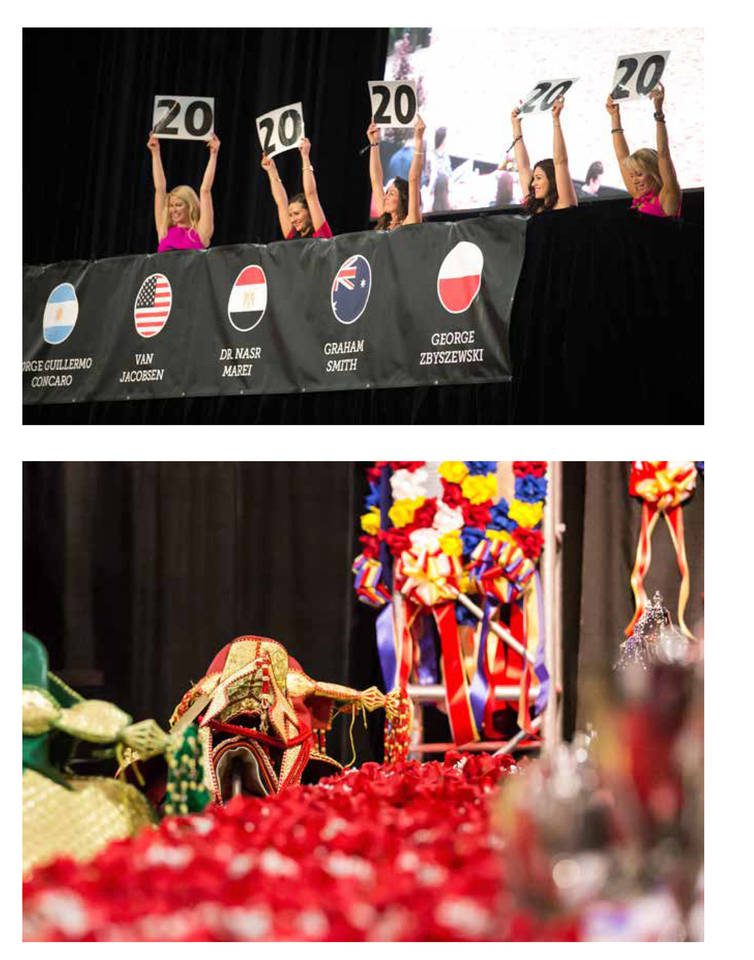 The tenth anniversary celebration of the show encouraged a media frenzy in the Arabian community. The show was broadcast live across the globe via iEquine managed by James Mead. The Arabian Horse Times and the Arabian Horse World conducted daily interviews of spectators, exhibitors and show officials, and professional photographers representing magazines from all over the world shot thousands of photos. Arabian Horse Results and Arabian Horse Times Global created daily highlight videos that offered a spectacular recap of each day’s festivities.

The commercial exhibit area brought unique boutiques and equine-themed shopping that offered something for everyone. Commercial Exhibit coordinator, Kelly Charpantier worked overtime to ensure a positive and successful experience for commercial exhibitors and shoppers alike. 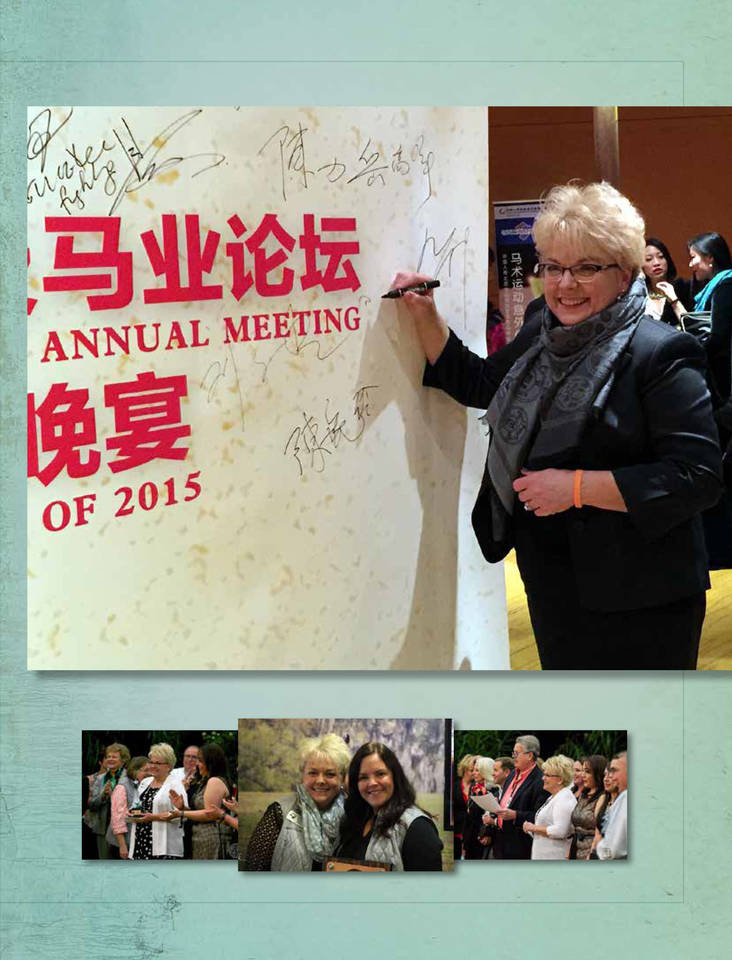 AHBA Ambassador Award | Each year, the Arabian Breeders World Cup recognizes and honors a true ambassador to the Arabian breed. This annual award celebrates the efforts of individuals who bring the Arabian horse to the forefront of the world stage. This year, the AHBA recognized a woman who has devoted the past 31 years of her professional career to the Arabian horse industry, Debbie Fuentes. As the Registrar and Sr. Director of Registry Services for the Arabian Horse Association (AHA), Ms. Fuentes manages the Registry Service department which provides customer care regarding membership, registrations, transfers, racing and other registration-related processes. She also serves as staff liaison to the Registration Commission and Membership Committee. While working for the Arabian Horse Registry of America, Ms. Fuentes spearheaded the committee that developed and implemented the Registry’s change from blood typing to DNA, as a parentage verification tool. She also served as the chair of the Equine Species Working Group from 2006 – 2008 and was a board member of the National Pedigreed Livestock Council from 2005 – 2007 where she served as its Vice President from 2008 – 2009 and has been its President since 2010. She serves on several committees and is active with the American Horse Council. As the Arabian horse’s North American breed ambassador, Ms. Fuentes serves as a delegate to the World Arabian Horse Organization. She received the Friendship Award from the Tennessee Walking Horse Association for her outstanding consulting work in DNA testing and registration. She was recently asked to serve on the All Nations Cup Committee. She graduated with a B.S. in Business from Colorado State University in 1984. Ms. Fuentes is married to Jorge Fuentes and they have 3 children, Shannon, 25, Lexi, 22 and Ryan 19. 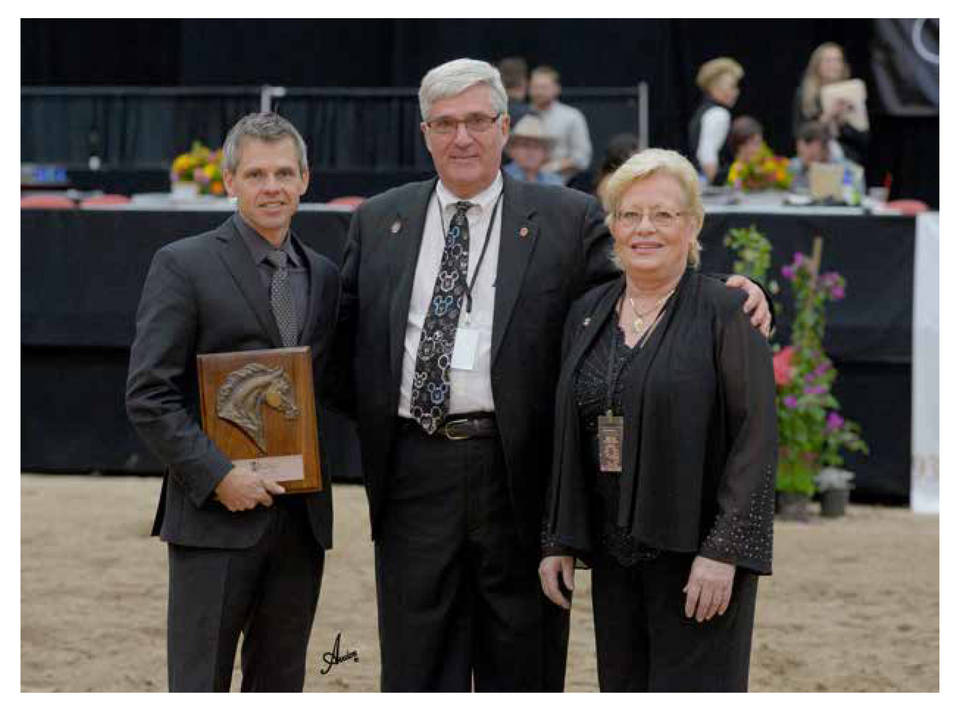 Handler of Excellence Award | Each year the judges are asked to select from handlers of the show, both professional and amateur the person they believe demonstrates the best horsemanship, sportsmanship, respect for their horses and their peers, as well as who represented the spirit of the show through their handling and presentation of their horses. This years Handler of Excellence was awarded for the second consecutive year to Mr. Ted Carson. The award was sponsored and presented by Chris and Sonya Bickford. 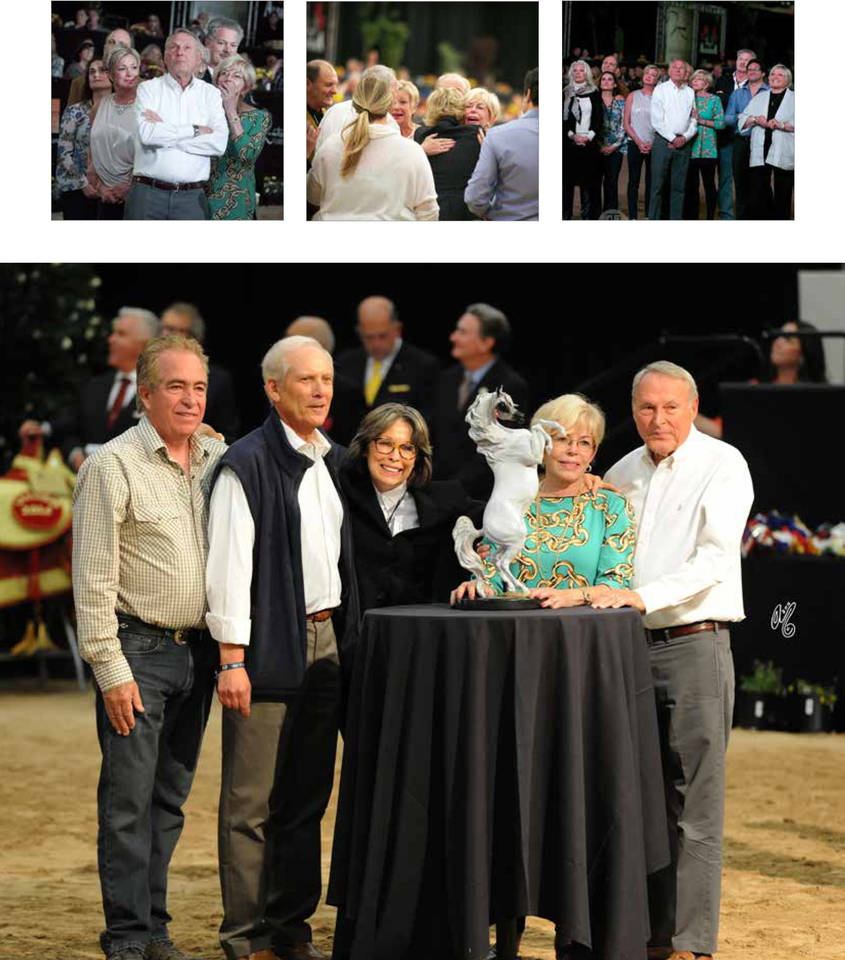 The AHBA Lifetime Achievement Award | The Arabian Horse Breeders Alliance Lifetime Achievement Award is given to those who have devoted their lives to the betterment of the Arabian horse community. For their commitment, the Arabian Horse Breeders Alliance was proud to honor Robert and Dixie North with this prestigious award on the final day of the event. Though he is a member of the board of directors, it took a great deal of effort and planning to be sure Robert was completely unaware of the board’s intent to present he and Dixie with the award. They entered the arena on Sunday for what appeared to be a routine introduction. The lights went out, the video screen lit up and the powerful music thundered through the building. When Robert and Dixie finally realized the video was displaying a tribute to them, the tears began to fall. It was a beautiful moment. The exquisite bronze award presented to them was custom designed and created by their friend and amazingly talented artist, Carol Fensholt Nierenberg. 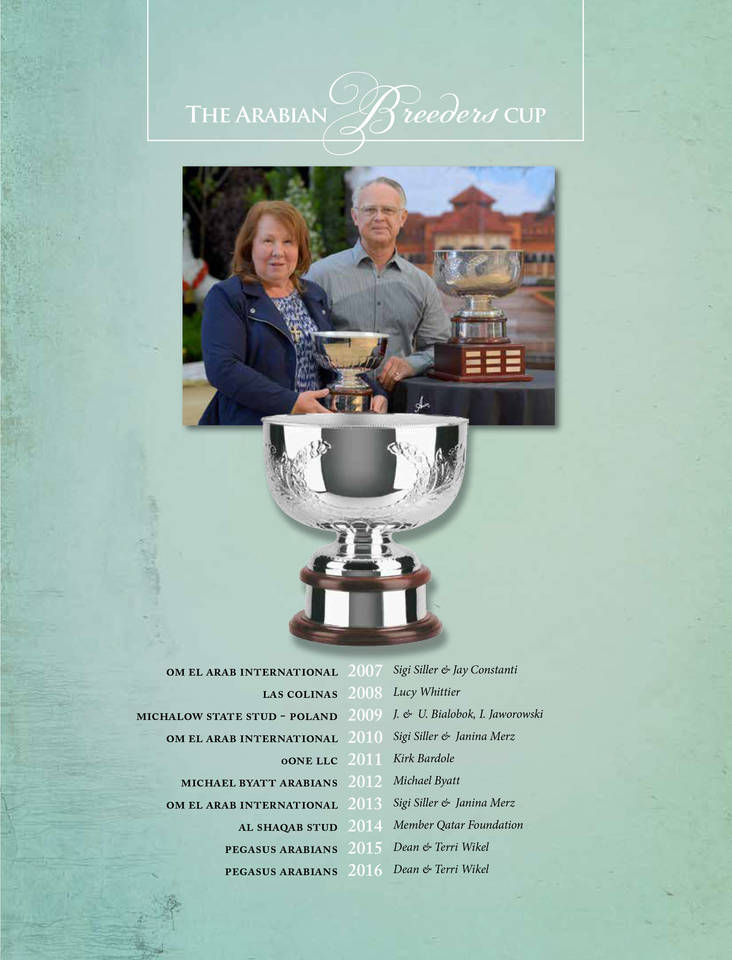 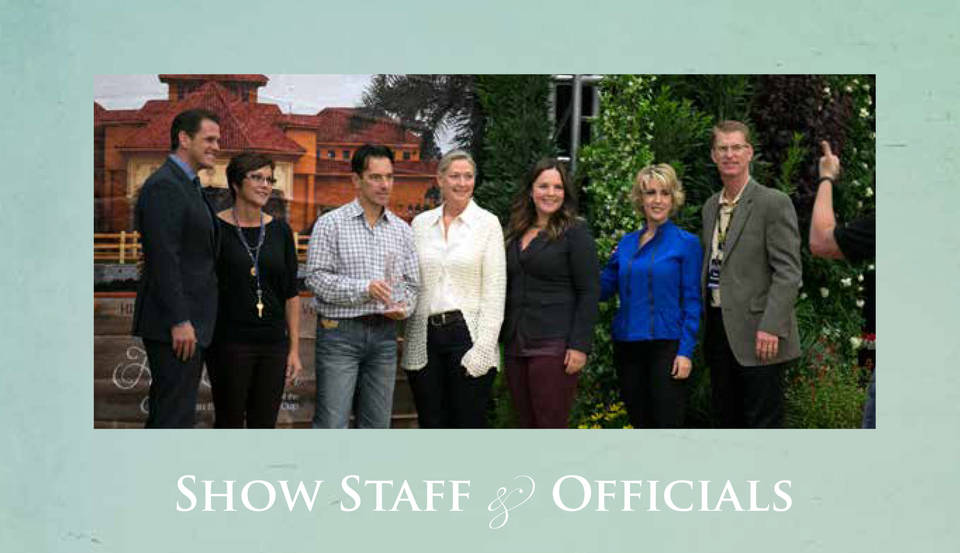